Leonardo Da Vinci is one of the very few individuals assorted of diversified skills that have ever lived. His perception of the world was logical than mysterious. He is the most famous Renaissance Genius.

His drawings and designs evolved to be helpful for designing useful appliances like parachute, tank, helicopter and many other things. Even many of the devices used in the present times are based on the concepts of Leonardo Da Vinci.

He is an inventor. Leonardo design and forward-thinking is an inspiration of many other inventions.

Let’s look at the best 10 inventions of Leonardo Da Vinci that the world has benefited.

Great Plague of Milan, had killed 25% of the population. Leonardo Da Vinci decided to design a city which would not be affected by such diseases.

The major cause behind this epidemic was improper sanitation. His vision of Ideal city was equipped with better sanitation so that such issues did not cater further.

Apart from it, the concept of Ideal city was based on a unity which enhances communication and services could be enhanced.

The city eventually designed by Vinci had connected canals through which commercial purpose was fulfilled and the sewage facility was enhanced.

The canals were designed in the form of series, divided into the upper and lower area. The upper area was used by gentlemen whereas the lower area of the canal was used for trade by the travelers and the tradesmen. The Canals were wide enough to prevent jamming on the streets.

Apart from this basic feature, the city is considered as an ideal concept of invention and engineering which was presented in an architectural manner as an absolute work of art.

If you come to the above-the-ground structure the best part about the Ideal City is that you will be able to view the best of designs for urban architecture. It consists of buildings which have pillars and large arches.

The buildings have the facility of fresh ventilation and differently-set stables for horses. Although the concept was vivid, this architectural plan of Vinci never came up in existence.

9. Aerial Screw: the ancestor of the modern helicopter

The seeds of the flying machine of today’s world were probably hidden in the sketches Vinci made as early as in the late fifteenth century. However, the saddest part is, he never implemented them.

Vinci’s aerial screw resembled the giant whirling pinwheel in terms of look and was similar to the helicopter, as we know it today, with respect to the functionalities. Its “blades” was composed of linen.

Also called as the “Airscrew” or the “Helical Air Screw” it was meant to compress the air in order to fly – a concept similar to what we find in today’s helicopters.

The screw shape proposed other possibilities to Vinci and came to be used for his future designs and discoveries too.

8. Ornithopter: the birth of modern aviation

Da Vinci had a keen interest in birds. He observed them, made sketches of them. Birds were in fact, the major source of his inventions.

The Ornithopter was discovered out of this interest and it would allow human beings to fly through the air just like birds.

It is also known as the flying machine It resembled birds or bats rather than the airplanes of today.

The concept of similarity between the flapping of birds’ wings and the pilot’s turning of cranks joined to a rod-and-pulley system lay in his design.

The wings were designed in such a way that they would be twisted when they flapped. It proved that Vinci had the concept of aerodynamics years ago, it was invented!

It is eminent that the concept of Vinci’s designs was engineered perfectly, one of the unique concepts justifying the same is the design of Robotic Knight. It was based on the principle of use of gears, pulleys, and weights.

These three components are known to be the crucial parts for all the inventions related to automation. The further inventions of the clock, hydraulic power saw, and air conditioner were based on this theory.

The same mechanism was used in the self-propelled cart invention designed by Vinci. Coming back to the Robotic knight, so far, no final design for it has been achieved, but there are fragments of the design which can be found in his notebook.

The Knight which was eventually designed was put together with wheels and gears which were connected with the help of a pulley through a cable system.

The astonishing fact about it was that the robot was capable of moving independently. It could move, sit and lift as per requirement.

This design was finally patented by Mark Rosheim in the year 2002. The designs used by NASA for developing robots are based on the designs put forward by Vinci.

The concept of a moving vehicle was unknown during Vinci’s time. But the self-propelled cart proposed by him was capable of showing movement without being pushed.

The moment the brake was released, the cart propelled forward. The purpose of the steering was to give direction to the cart. Few angles were set as a priority for the steering and accordingly, they used to execute.

The concept was not tried until the 20th century. When finally in the year 2006 this concept was put to test in an Italian institute.

The astonishing fact was that the concept actually worked. It has been put to note that the design of Mars Land Rover matched the concept put forth by Vinci.

5. Machine gun- the premature form of how we see it today

Have you had a close view of the present machine gun? The present design of the gun has evolved from the design of 33 Barreled Organ which was proposed by Vinci. The concept of the gun was that loading and firing could have adhered simultaneously.

The design was named 33-Barreled Organ because of the connected guns which had 33 small calibers. The combined canons were divided into rows which were three in number and each row had 11 guns.

These guns were loaded on a single platform and the base was attached to a large wheel. This platform was single and used to revolve.

The organ was loaded at a single time and during the war when the first row was fired the platform upgraded the second row automatically for firing.

The best part about the concept was that in the meanwhile when a single row was firing the other rows were left to cool, eventually, the loading for the seats was hassle-free. This helped the soldiers with repeated firing.

The organ is named owing to its presentation. The rows surmised like an organ. This concept was used commercially as a machine gun in the 19th century.

Of the many devices conceptualised by Vinci, there were many which were never built. The same fate goes with the Viola Organista. It was a musical instrument which was designed in the form of a machine.

The instrument was combined with a harpsichord, viola da gamba and an organ. This instrument was conceptualised 500 years ago by Vinci but came into existence thanks to Slawomir Zubrzycki who was a musician.

It is a key instrument wherein the strings are attached to a moving wheel which is wrapped with the hair of the horse.

This string is attached to the keyboard which produces a sweet sound when pressed. Presently you can find this instrument in a local music shop close to you.

3. Diving Suit-feasible as well as the practical invention

We all get excited about hearing about scuba diving. But the first-ever diving suit was designed in the 15th century.

The concept of the diving suit was proposed to destroy the enemy ships by cutting holes in the hulls. It was in the 15th century when Vinci used to stay in Venice.

To protect the country from the enemies he designed the diving suit through which the men could reach out to the bottom of the harbour when the country was invaded and would destroy the ships without being caught.

Along with the diving suit the divers from the Vinci’s era used to carry hoses for breathing which were connected to an air-filled floating bell made of wine bladders.

The divers used to carry a bottle along with them for urinating so that they could keep underwater for an indefinite time. So, when you enjoy your scuba diving now, be aware of the concept behind the suit you wear.

We all are aware of the principle of fiction which is minimised with the help of Ball bearing. But did you know that this concept of Ball Bearing was proposed by Leonardo Da Vinci as early as in the year 1498-1500?

If you wish to see the first-ever designs conceptualised over the fact of Ball Bearing, you should have a look on the rotating table of the Roman Empire which was eminent in 40 AD.

It was in 1500 that the concept of the ball bearing for lowering the impact of friction was designed by Vinci.

But the patent to this design was given to Philip Vaughn, an Englishman in the year 1791. Presently every machine which executes on rotary motion works on the concept of the Ball bearing.

During World War 2, the Royal Air Force was concentrated on destroying the German Ball Bearing factories so that the German War Machines could be stopped.

If you search out for the invention details of Parachute you will come across the name of Sebastien Lenormand who is considered to have invented Parachute in the year 1783.

But considering the facts, the credits of the first designer would go to Leonardo Da Vinci. The sketch designed by him had an entirely different concept.

His estimated studies were based upon height and distance. The estimated concept was that an opening of linen, if stopped, then a person thrown from a height of 23 feet with its support would land without being injured.

The present canopy of the parachute is rounded but the design presented by Vinci was triangular in shape.

Apart from this, the linen was covered with a frame made of wood which is unthinkable for today’s version. So, as the weight was heavy and the shape was triangular, the pressure of water required for floating was in question.

Similar to the various other concepts of Vinci this design never came to existence but Adrian Nichols Od Daredevil tried the Vinci design in 2000 and it was a smooth ride.

Now you are aware of the various designs and concepts proposed by him and the products of his fertile brain which are currently into use. He is still popular for his far-sightedness in today’s age. 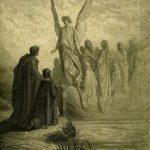