He was one of the most powerful and significant emperors of Rome. He ruled for about 17 years, from 194 AD to 211 AD.

Septimius established his dynasty after he was in power and converted the government into a military monarchy.

10. Severus born to a family with no political background

However, his two cousins Publius Septimius Aper and Gaius Septimius Severus, belonged to a political family. Both of them served as consuls under the Emperor Antoninus Pius.

He got married in 175 AD when he was in his early 30s. He was married to Paccia Marciana from Leptis Magna. He had her statue made when he was an emperor.

Their relationship lasted for about ten years but without any surviving child. Paccia Marciana died in 186 AD due to some illness.

Septimius had some belief in astrology, so he looked for a woman with a matching horoscope to remarry, as it would bring him success.

He married Julia Domna in 187 AD in Lugdunum, hoping to be the King shortly.

Severus was the governor of that place during his second marriage. Julia was a wise woman who made herself famous by writing philosophical letters. They had two sons Caracalla and Publius Septimius Geta born in 188 and 189 AD respectively.

9. Severus known for knowing more than one language

He started working in the senatorial ranks with the recommendation of Gaius Septimius Severus in 162 AD. However, his career was not smooth, and it kept changing. He served as a vigintivir in Rome, where he had to look after the road maintenance in or around the city. Also had some experience as an advocate.

8. Severus appointed as a governor by Commodus

Within a year of him serving as a governor, Commodus was murdered and replaced by Pertinax. Pertinax was strict and never increased the wages of the army, so he was assassinated.

Then Julianus was selected as the Emperor. Severus overpowered the position by killing Julianus and his supporters. By this time, Severus had managed to impress people with his loyalty and sincerity.

Septimius had loyalty and support from almost 16 legions, so he was the chosen one. The good relation with Pertinax also helped him become the Emperor since the time of working under Pertinax.

As an emperor, Septimius renovated and repaired numerous forts and Hadrian’s Wall to use them while gaining Britain’s entire Island under Roman power rule.

He repaired the wall to conquer the northern part of the Island. By 210 CE, Severus had built an advanced base at Carlow on the Tay, for campaigning.

7. Severus’s relation with People and Senate

Like most other Roman Emperors, Septimius Severus never had a good relationship with the senators or the senatorial board.

The main reason behind it was that he had seized power from the Senate with the military force’s help. He was also responsible for the execution of numerous senators for corruption and sometimes conspiracy against him.

On the contrary, he had a very smooth relationship with the people of Rome despite military dictatorship. People were loyal to him as he minimized the ongoing corruption during the reign of Commodus.

Unfortunately, the scenario changed a bit from 197 AD, where Septimius came under Gaius Fulvius Plautianus and wanted control over imperial administration.

However, Julia Domna and Plautianus did not have good rapport which resulted in a bloody power crisis. This led to a negative effect on the centre of power in Rome.

Platanus was executed for being involved in killing Septimius and his son, Caracalla in January of 205 AD. Since then, Septimius started depending on the advice and decisions of his wise wife, Julia Domna.

6. Severus respected by soldiers for his good deeds

In 193 AD – the Praetorian Guard involved in the murder of Pertinax was discharged by Septimius. They were asked to take off their ceremonial armour and stay at least 160 km away from the city.

The guards were replaced with new troops belonging to Danubian legions. Also, there was the increment in the number of legions which reached to 33 from 30. The new legions were named as Parthica I, II, and III.

In addition to these changes, he donated a thousand sesterces to each soldier and raised their wages from 300 to 400 denarii. He established a central military reserve in Rome so that the force could be sent anywhere when needed.

Septimius had a personal physician belonging to the Christian community. He saved many Christians from mobs during his period of reign. However, he is not taken as the saviour of Christians but as their enemy and their persecutor.

The policy related to Christians was made by Trajan and was still applicable when Severus became the Emperor. He did not change the policy but started following it.

The policy stated that any Christians who refused to worship their Emperor or the god would only be punished but never be sought out.

He wished to bring harmony in religions, so began to promote syncretism. However, he would punish anyone wanting to convert to Judaism and Christianity.

Despite good deeds towards Christians and Christianity, Severus is considered the persecutor of Christian as the number of Christians’ persecution was high during his reign.

4. Septimius turned from wise to a cruel ruler

Septimius began as a wise and gentle emperor. However, he turned into a harsh and cruel one within a few years of ruling.

As an emperor, he was the immediate guardian of Rome’s people, but he enjoyed torturing and punishing without mercy. He was a follower of the Roman religion, so he wished everyone else to follow the same religion as his.

Anyone acting against him and avoiding his religion would be tortured and sometimes executed as well. He also enforced a new law to force everyone to follow his religion.

Apart from this, he had a bad relationship with senators and the public. Many senators were executed during his reign for involvement in corruption and conspiracies against him.

3. Severus’s reign turned to be a critical stage

Septimius became the Emperor of Rome in 194 AD and the period of his reign was characterized as a critical stage in the development of despotism and later evolved as the Roman Empire.

Severus travelled to many places for campaigning. He began his travel reaching east via sea in 197 AD and landed at the port of Aegean in Cilicia. He then travelled to Syria by land.

His army backed him up throughout his campaign. After Syria, he moved to the Euphrates where he campaigned against Parthia Empire. He and his army managed to sack the Parthian royal city of Ctesiphon.

They also added the northern part of Mesopotamia to their empire by taking over Parthicus Maximus’s title. The victory over Parthia happened in 197 AD.

2. Story behind becoming a winner in the Year of Five Emperors

Septimius was an influential emperor despite some of his cruel acts. His reign is taken as a significant one due to the expansion of the empire, increment of military force, and the army’s increment of wages.

Apart from this, the period is also famously known as the ‘Year of the Five Emperors.’ There was a massive battle and turmoil amongst the five emperors.

The emperors included Pertinax, Pescennius Niger, Clodius Albinus, Didius Julianus, and Septimius Severus. All these emperors worked and made strategies to seize power from the other Emperor and become the Emperor themselves.

Pertinax was assassinated, the Senate assassinated Didius Julians, Niger lost a battle against Severus, Albinus ruled as co-emperor with Severus and was assassinated by Severus in 197 AD. So, the only survivor of that period was Severus himself.

Septimius Severus continued his campaigning until 211. He had plans to empower more parts and add on to the Roman Empire.

Unfortunately, the campaign could not be extended as he fell ill in 211. Also, the tribes he was campaigning against him had grown stronger than him, and he could not campaign against them.

He died on the 4th of February in 211 CE. He was buried in Rome in the Mausoleum of Hadrian. His son continued the campaign even after Severus’s death but ended up negotiating in 212. 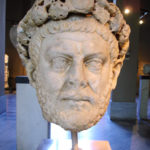 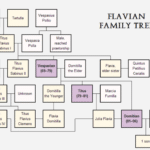 Caesar Domitianus Augustus was born on the 24th of October, 51 AD. He belonged to a dynasty known as the Flavian Read more 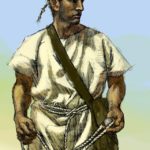 The Roman army strikes us with the imagination of hand-to-hand and heavy infantry, but it was a lot more complicated Read more

55
SHARES
ShareTweet
Linkedin
Cite this article as: Richard Marrison, "Top 10 facts of Septimius Severus," in HistoryTen, May 2, 2021, https://historyten.com/roman/septimius-severus-facts/.
About the Author